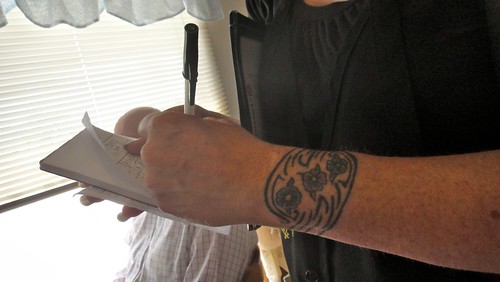 Today’s interview is with Will Beckett of Hawksmoor, a rapidly growing restaurant brand in London, and follows on from my recent interview: Customer service, people and how caring does scale – Interview with Gary Vaynerchuk #1aDayQandA

It was when they ranked No. 36 in the Sunday Times’ 100 Best Small Companies to work for in 2012 that I decided I’d like to find out more about what makes them tick and what makes them so successful.

This interview makes up number forty-eight in the series of interviews with authors and business leaders that are doing great things and helping businesses innovate, become more social and deliver better service.

Here’s the highlights from the interview I did with Will:

Will Beckett (right in the picture) and Huw Gott (left in the picture) co-own the Underdog Group, which owns and operates four Hawksmoor steak restaurants in London. The group’s turnover for 2011 was £10.6m, up from £3.7m in 2010

Friends since the age of 11, Beckett and Gott first teamed up to open Shoreditch bar the Redchurch, in London in 2003. Beckett was studying for a masters in modern history at UCL at the time while Gott had managed to convince a friend to part with £100,000 to set up a business and, needing help, asked Beckett to assist. The pair formed the Underdog Group in the process and the Redchurch soon became a popular local haunt in east London.

Initially scared by the prospect of doing food, the pair were tempted into a full F&B offering at their next site, Green and Red, also in Shoreditch, following a trip to Mexico together. On their return they found authentic Mexican food hard to come by in London so decided to do it themselves, opening the bar and cantina in 2005. Next came gastropub the Marquess Tavern in London’s Islington in 2006, before the pair launched the restaurant with which they were to become synonymous – Hawksmoor, which opened in London’s Spitalfields later that year.

This was followed up by a second site in London’s Seven Dials in 2010 and Guildhall in 2011 – during which time the group jettisoned Redchurch, Green and Red and the Marquess to concentrate on Hawksmoor – before the pair added a 60-cover bar to their Spitalfields site and a fourth restaurant in London’s Piccadilly in 2012.

As well as proving very capable restaurateurs, the pair have also become highly regarded employers, and take pride in their position of 36th in the Sunday Times Best Small Companies to Work For 2012 list.

If you are in London you should check out one of the four Hawksmoor restaurants. You can also follow and connect with Will on Twitter @HawksmoorLondon.